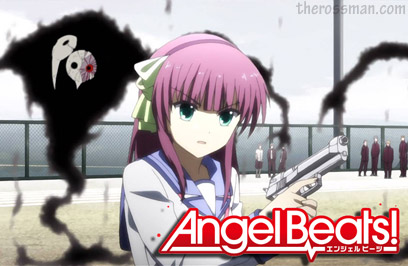 Stop right there. Go and get this series (Angel Beats!) now. Watch it. DO NOT read anything about it first. Do not go to Wikipedia, do not read any other reviews, do not even talk to anybody who's seen it... This is one of those quintessential series in which the less you know the better your experience will be. Just know that Angel Beats is well worth your time. I give it 21 out of 21 Beats of Angelic Goodness. Go and watch it, THEN if you want my spoilery opinion about this goddamn masterpiece you can come back and read the rest of the review.

If you need a little more help in deciding if you want to watch it — but don't want full spoilers — I offer you the following (and still, I beg you to not read even this... Seriously, go in as blind as a kid who's swallowed 50-pounds of pennies): Angel Beats is like a funktastic mixture of The Melancholy of Suzumiya Haruhi (the good, first season), Haibane Renmei, Lita Ford, and Rambo: First Blood - Part 2.

If that doesn't get you to want to see it, then you are a giant dick-cuntweed, and you have no taste of what is awesome in this world.

Okay, the rest of this review will focus on some specific thoughts on the series as a whole... There's just so much to talk about here, and all of it good. This has happened to me before; I've fallen totally in love with a show (or a woman) based on my first intimate experience with it/her, and I'll say the same thing now that I have each time in the past: this could be a "Top Ten Contender" right up there with Cowboy Bebop, Giant Robo, and Gunbuster on my list of all time favorites. I may need to get frisky with it/her a few more times to be sure, but yes, Angel Beats is just insanely good regardless. But once again, please just take my word for it and watch it without any idea of what you're getting yourself into.

So what's Angel Beats about, and what's up with that "magical girl show-like" name? First of all, yeah, the name itself almost completely put me off to the whole thing before I gave it a chance, but the meaning behind the title makes perfect sense in the last 60 seconds of the final 13th episode. Trust me. And when you hear the reason for the show's name you will cry like a baby who just had some hobo shit in its bottle.

Anyway, Angel Beats is all about one Otonashi Yuzuru who wakes up one night without any of his memories, right in the middle of a fancy, sprawling high school campus. Near him is a chick with a sniper rifle trained on a pale-haired girl a couple of hundred yards away. The girl with the gun, Haruhi Nakamura Yuri, tells Otonashi that he's already dead, and that he's found himself in a sort of afterlife in which the souls of the deceased (including her) are rebelling against God and his Angels... One of the Angels being the school girl in Nakamura's sights.

Sniper girl tells Otonashi that since he's already dead he cannot "die" again, and that he needs to join her group and topple the uncaring deity who runs the controlled and unfair world that they've found themselves in. Otonashi doesn't believe the girl at all, and so he nonchalantly makes his way over to the small, dainty albino "Angel" and tells her about the sniper girl and how she said that people couldn't really die in this world. And so to show him that that information is at least correct, the Angel magically forms a sword-blade on her arm and stabs the poor fucker right through his heart.

Otonashi wakes up (for the second time) the next morning in the school's infirmary, and is soon confronted by a lot more of Nakamura's anti-God SSS group as they try to convince him that the only way they can keep from getting "obliterated," and thereby cease to exist in this afterlife, is to fight against the Angel (who is the student council president), and do everything that they can to disrupt God's hold on the small universe that they find themselves trapped in.

At first Otonashi is as confused as an anime con-goer when confronted by a shower, seeing as the school looks like the most perfect place he's ever seen, but soon he begrudgingly accepts Nakamura's offer and joins her corps when he finds out that everybody being tortured there lived dreadful, atrocious lives back in the real world, and all they want is to be free from that kind of pain ever again. Then tons of wacky and awesome stuff follows. Really.

The premise of the show was enough to pull me in, but it's the entire mood of the series that truly made me fall upon my knees and start praising it like a primitive who first lays eyes on a BOOM-stick held by a savior with a chainsaw hand. Angel Beats is equally hilarious (Full Metal Panic: Fumoffu! hilarious), action packed (Black Lagoon action packed), and heart-wrenching drama (Grave of the Fireflies wrenching... but unlike Fireflies, Beats has hope to it; there was nothing but pain and suffering in Fireflies). It is a masterful juggling act, but my GOD does it pay off! I was so emotionally invested in each of the characters that when shit starts to turn all gloppy just before hitting the industrial-sized fan I felt true heartache for the people involved. I seriously had to put off watching anything deep for a few days after it ended just to let it all settle in. I... Wow. That final episode alone, if you don't at least tear up a bit you are a GODDAMN ROBOT. Burn in Robot Hell, you soulless automaton!

What separates Angel Beats from other, more recent shitty "emo" shows (like the abysmal Clannad and its fellow ilk of crybaby harem anime) is that Beats doesn't need to clue you in as to when to feel sad or pity by forcing its characters' eyes to start leaking like broken faucets while they bellow their uninteresting one-dimensional hearts out. It's too good for that. Honestly, the idea of telling the audience "Hey, you should feel sad now because, see, that whiny, loser girl is crying. Be sad" is worse than telling stupid audiences when to laugh with a canned laugh-track.

But like I said before, it's not all tears and tragedy, it's funny as all hell too. The whole world feels like a big game... Like Haruhi Suzumiya's universe, or to a lesser extent the Full Metal Panic 'verse. And the school is filled with NPCs (non-player characters) other than the real humans and angels too (like in an RPG town), but they're "well written" enough that you can hold conversations with them and probably not notice the difference between them and Nakamura's SSS brigade at first glance. This just adds to the surreal environment and tone of the place. It may be stocked with lots of background characters, but we know that they're not real people, and therefore this high school of the dead feels very empty and slightly depressing.

I was absolutely amazed at how fluidly this show could move from absolute hilarity to one of the most moving scenes I'd ever witnessed in such a small space of time, and none of it was forced. The emotions it's able to gently pull out of you are all sincere and well earned. And if you retards out there still think that K-On is the very best there is at "high school rocking and rolling," then you really need to see Angel Beats and get your shit sorted out. The resident girl band, Girls Dead Monster, sing some hellacious rock anthems, power ballads, and some haunting melodies of past-life pain throughout the 13 episode run. And they're all good tunes, and (get this!) they're sung by characters who you GIVE A SHIT ABOUT, and who actually do more than "look cute" with a guitar in their hands. Christ I hate K-On.

Truly, this is pretty much the best amalgam of every genre in anime since YAMACSICO. It's got high school comedy, guns, some sci-fi, the supernatural , romance, hyper drama, robot girls (well, a girl who programs her own super powers in a computer), and some kick-ass rockin girls band. It has it all, and it's all so beautiful. Anime has been done now. It can retire. Now go and (re)watch it in all its glory (again). Man, I personally just have to rewatch that final episode and all those goodbyes. Just the way each character was there and then...

Yo, fool! A strange show, with some strange shit goin' on in it, like an all-glass rocket car speedin' past you with me bangin' your sister in the back seat! And I even got into it more when she called out YOUR name, G! That's the kind of fucked-upness this show's all about. Watch it, fear it, and then cry a little tear for all yo dead homies. That's the Angel Beats way!

It confused my emotions, yo, but I think I liked it. I laughed, I loved, I shot a couple'a motherfuckers away with my glocks along with those dead high school geeks. Word up!

Angel Beats, huh? Yeeeeeeeah, about that... No. Not gonna happen. Maybe if it was called "Metric Ass Kicking School of the Dead", possibly, but Angel Beats? No.

Yeah, the Rossman tells me that there's tons of bullets, knives, swords, grenades, stabbings, shootings, eviscerations, and all that, but goddammit! It's called "Angel Beats!" I just can't do it.

No watchy, no reviewy. Now, let me get back to pouring this hot tar into the Rossman's gas tank before it cools.