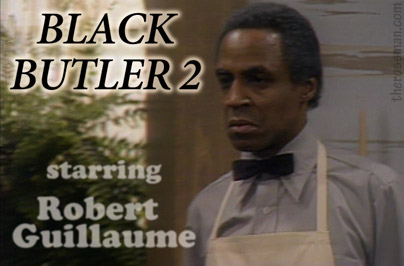 Last year, just after I finished up the original Black Butler anime series, I had heard some terrible rumors that they were making a sequel to the Victorian Era demon tale of revenge, and that made me so sad.

See, the original Black Butler was actually a decent yarn of betrayal, vindication, and damnation that turned very murky, then outright bitter and dark (but in a GOOD way) by the final episode. And the last ten minutes of it were absolutely amazing! The risks that the storytellers took, and the very last few moments of the show made me applaud the series with hoots and hollers of approval. It was absolutely fantastic!... But to follow it up with, well, ANYTHING just seemed like blasphemy. Like I said said before, to give this show a direct sequel would be like making a follow-up series for Cowboy Bebop, or Chrno Crusade — the brilliant finales of both would just be shat upon in order to sell another season of advertising. There'd be no real way to make a sequel to Black Butler without pretending that the final last ultimate scene didn't occur, I thought, and it's that closing quiet moment that made me love this thing so damn much.... Rat penis!

But, I actually calmed myself down, and when Black Butler 2: Blacker, Butlier! finally came out I gave it a go. And I must be quite honest with you, they actually pulled it (a good sequel) off... For the most part.

Things do start a little strange in the first episode of Black Butler 2. It's the end of the 19th Century, apparently just a little while after the giant final battle of the first series that almost burnt London to the ground. We begin by following one of the most spoiled and annoying douchebag preteen boys on the planet (one royal, orphaned Alois Trancy) as he laughingly puts out the left eye of his hot maid, and forces his calm and collected butler, Claude Faustus, to dress and then redress him over and over again because he apparently likes grown men touching him. The writers do try to give a reason as to why the little fruitcake is like this, but in the end Alois is just one giant smirking turd of a child, and when I first thought that he would be the main protagonist of the Black Butler 2 story I promised myself I'd stop watching after the 1st episode unless things changed and changed FAST.

Thankfully, about halfway through the first 30 minutes, the Trancy mansion receives a mysterious guest wrapped up in a dark cloak and hat, and carrying a giant suitcase with him. I'm not really spoiling anything by telling you that this figure is of course the demonic uber-butler Sebastian Michaelis (the domesticated guardian and bodyguard of young Ciel Phantomhive from the first series), and he's PISSED. He's a demon on a mission, and the trail that he was following to his goal led him straight to the Trancy household. Soon Sebastian finds himself in a head-to-head battle with the Trancy servants and Claude — who is also of course Alois' own contracted demon (who will be allowed to devour his master's soul after fulfilling the contract [whatever that may be] that brought the two together for revenge in the first place). And we know this because no normal human in the entire universe would put up with such a fantastically douchey kid like Alois unless he/she were doing it all for the reason of destroying this faggot's oh-so slappable immortal center.

Anyway, after that opening ep, we're thrown into a world in which we're not really sure if the events of the first series ever actually took place, or if this is a do-over show. Ciel's back and seems to be doing fine and having (relative) fun with his fiancee Elizabeth and his goofy servants, but things stay confusing for a while with some bizarre, but interesting filler episodes, wherein we get reacquainted with our characters and their situations. D-bag Alois then starts to make his presence known to Ciel though, and before long the Phantomhive and Trancy estates are at all-out war with each other, with both boys who are contracted with demons trying to eradicate the other for reasons that neither may fully know or understand. It seems the butlers have their own plans for the two youths, and one is really just a pawn to entrap the other. Things get really sadistic and creepy before the very strange, yet enjoyable finale. Yeah, I could spell it all out for you, but I actually recommend this show, and thusly don't want to ruin your potential enjoyment of it. Needless to say it's not long before a lot of bloodshed and soul eating then hits the fan. Good times for all.

I will say that the reason that this show exists (meaning "why they decided to make a story that's told past the fantastic finale of the first season") is acceptable, and the end of this series twists things up enough and keeps us guessing about the fates of all those involved well enough that I was pleased with how it tied everything together. Like the first series, nothing ends happily-ever-after for our children, but the physical and psychological battles that lead up to the final credits roll make it worth while. Well, that is if you can handle the fairly large amount of scenes featuring Alois getting "played with" by a perverted old aristocrat who loves his boy meat.

That's probably my biggest warning about this show: it does not pull any punches when it comes to mental and corporeal damages done onto our lead human characters. Yeah, Alois is a total prick and a half, and it seems like he always was one (even as a small child), but he did put up with a lot of disgusting shit to get where he is today. And while they thankfully don't show any actual man-boy-love, the insinuation is painfully there. Don't worry though, everybody gets what he deserves in the end..... Er, pun not intended.

So what'd I think of Black Butler 2? It really wasn't all that bad. I was bracing myself for something really unnecessary and shitty, but the whole thing proved to be quite entertaining, despite Alois' douchebag nature. My only real regret is that we did not get much Elizabeth action in this season (I can't explain why I love that crazy bitch so!), but all in all I think it matched the first season for excellent Faustian damnationess. I give it another B++.

Holy FUCK! Awesome! No, I'm not talking about the pretty man butlers or the froofy millionaire boys, but what I wouldn't give to go mano-a-mano in a battle royale with a demon like that Sebastian dude!

I'd bring the Monkey of Madness of course, but that still wouldn't level the playing field what with that glowy-eyed freak able to swallow souls and produce an almost unlimited amount of silverware from his sleeves to hurl like mini arrows from Hell! Though I'd set up some traps, like some gay little neighborhood kids around the fighting ring, and when that loosey-goosey agent of the damned took his eyes off of me to soak in some of that pedoass-soul, I'd let the Monkey of Madness suck down his immortal being! I've got to get this fight on pay-per-view! I'd make millions!

Sorry, but I just doooooooooooooooooon't get it. Were we like supposed to root for the gay demons who wanted to slurp down young boys' souls? Was I supposed to hope that the annoying twatty rich kids somehow won the day? Was I to hope that Hitler rose up about 40 years early and crushed England under the iron boot of fascism in order to kill everybody involved in this tale? I was personally rooting for an "Asteroid Armageddon" to wipe them all out myself.

Honestly, are all British butlers gay? Even the non-demon ones?