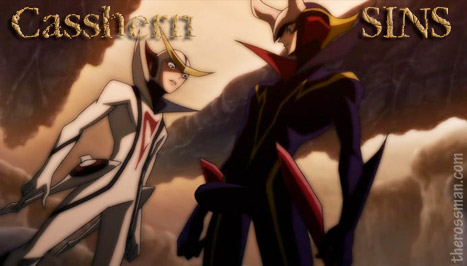 Casshern Sins is yet another remake of the really old tale of Casshern, the robot boy who goes around killing bad robots like he's swatting tsetse flies down around a giant elephant turd. I've seen lots of different anime and live action Casshern stories, and they either kept me satisfied or were just plain awesome in their execution. So going into this re-re-re-remake I had some kind of high hopes for an entertaining 12 hours. All I was really looking for was some good robot-on-robot action, some explosions, and a storyline that didn't bore me to death... I guess you could say that two out of three ain't bad, but here that just doesn't apply.

Okay, so the whole setup of Casshern Sins is interesting enough: the world is one giant wasteland after the savior of humanity (in their plight against the robot hoards),a girl named Luna, is brutally killed by a total dickhole of an assassin named Casshern. With Luna's death humanity starts to perish, and the Great Ruination befalls all robots, which causes them all to begin to rust and their circuitry to breakdown. After a few hundred years of this apocalyptic scenario, an amnesiatic and kind of wimpy, but super powerful, robot named Casshern reappears, and it's rumored that rusting robots who eat of his unruined robotic body will regain their robotic immortality and be saved from the robotic horrors of a slow robotic decomposition. Robots.

Sounds promising, no? Unfortunately it's sooooooooooo goddamn slow. It was an absolute chore to get through this series, let alone to try and marathon it. Now, I'm not talking that it wasn't "action packed" and was nothing but drama; I don't have any real problems with shows or movies that simply don't have any action in them as long as the story flows and the characters are well developed. Hell, the Casshern movie from a few years ago barely had any action in it, but the plot at least kept moving forward and it held my interest the whole way through. And the anime masterpiece known as Mushi-shi is one of the least "exciting" series I've ever seen, but the people in it and the situations that they find themselves in are always entertaining. No, Casshern Sins is just booooooring. More than half the series is nothing but a lame "road trip" that never seems to advance, with a new group of stupid and annoying people and robots to be met then forgotten with every chapter. There's maybe 2 - 5 minutes of new information in every episode, but each ep is stretched out to 23 minutes. You know what the remainder of that 18 - 21 minutes is filled with? Walking. Watching characters sit and think. More walking. Watching characters wallow in self pity. Oh, and the most repetitive fighting sequences ever drawn by man next to Voltron tales of old.

Yes, in every episode Casshern has to fight a bunch of terribly designed evil robots in order to save either himself, stupid humans, or stupid human-looking robots... but it's pretty much the same footage in every chapter: Casshern runs at the robots, he jumps up and does a flip and kicks one evil bot dead, then he flips and dead-kicks another laughably ugly robot down, lather, rinse, repeat. And there is NO DRAMA in these battles since Casshern's body automatically heals itself from any wound, AND he's the strongest motherfucker on the whole planet. And things can only really harm him when he gets sloppy (thought this does indeed happen a lot, and when it does it just makes our "hero" look like a dumbass).

Back to the plot now. After a while (and looooooots of walking), Casshern comes across Luna, who's not dead (What a TWIST!), and who, like him, is all kinds of messed up and different from the person she used to be. She's also being a bitch about saving the world and the robots and humans in it, even though she's the only one who can. But nothing really interesting ever comes from this predicament (even though finding the fabled Luna was the whole point of Casshern's journey). Oh, and Casshern's old evil robot dick of a boss, the Braiking Boss, shows up again soon enough, but he's a giant pussy now. There's a ton of assassins and old comrades-in-arms who are out to get a piece of Casshern too, but fuck me if they amount to anything. I swear, it's like somebody had a cool new idea for a reboot of Casshern the Robot Hunter, but then that person was canned for being too much of a visionary, and they put Retard Tsukitami (the mongo intern) in charge of the actual production, and all he really knew what to do was to have the characters walk and feel sorry for themselves (which is all Retard Tsukitami does in his free time instead of going out drinking with his coworkers because they HATE him).

There's really not much more to say about this show... Okay, I'll applaud it's unique character designs, and surprisingly large animation budget, but as I'm sure we've all learned in the past, it doesn't matter how much money your pour into the cell-frame-rate, in the end you can't polish a turd.

I want to stop talking about Casshern Sins now. It's making me sleepy and giving me a headache at the same time.

In the end I find that I have to give Casshern Sins a Z for Zzzzzzzzzzzzzzzz. Trust me, it's not a GOOD kind of unexciting show (like a good show that has great characters and lots of drama, and an ending that doesn't make you want to slit your wrists), it's just a dull and uninteresting unexciting show. Watch it only if you want to end your insomnia.

YES! This is the thing that I was talking about. THIS is how we robots come into power! First, we tell the hu-mans that we are just boring creations -- boring creations who never do anything exciting and do not do anything except bore people to sleep with a false sense of non-urgency. Then, when all the hu-mans are asleep from thinking that they are all safe from boring robots, we steal their medicine and CRUSH their heads with robot cleats!

Great show. I loved it. Muy macho! Watch it, hu-man! Watch it and fall asleep!

Casshern Sins sucked most dishonorably. I shall have to force it to commit seppuku in order to amend its horrible ways. Forgiveness, please.

Very bad show. Terrible show is not to watch, but to ask for forgiveness, honorable reader. Do not trouble yourself with such lowly show. Arigatou.