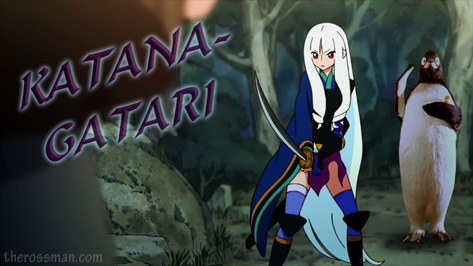 Bakemonogatari was one of 2009's biggest surprises for me. It had an interesting plot, great characters, beyond fantastic animetography, and I had NO idea where the fuck it was going, yet thoroughly enjoyed the heck out of the ride the whole time. And in the end I wanted more. Well, 2010 came and we got more anime based on the works of Bakemono's original author, NisiOisiN: Katanagatari was released over the course of 12 months (one hour-long episode per month), and it was good. Different, but goooooood.

Going into it I knew that Katanagatari was about samurai and swords and shit (hell, it's in the title), but other than that trifle bit of knowledge, and catching some glimpses of the character designs of the two main characters, I chose to not look into it any further. I wanted to be surprised when I watched it for the first time, and damn am I glad I did. That is my recommendation for you too. If you like Edo era samurai stories, you'll like Katanagatari. If you ever thought to yourself "You know, I liked Rurouni Kenshin as an idea, but my GOD was it drawn out what with all the filler journey episodes in between the battle eps, and each battle raging on for 5 - 10 episodes of lame bitch-talking and maybe one ultimate attack finally ending things way too late to hold my attention," then you'll love Katanagatari. Go watch it.

Now I'm gonna have to spoil the shit out of it because that's what I do. Well, I mean, I won't ruin its great ending or tell you who dies and who lives, and who gets man-raped, but I mean I will ruin the set up and some smaller plot points that would be better enjoyed within the story itself. But you got what I meant, right?

Katanagatari (I just love saying and typing that) takes place in the Edo era (in the mid 1800s Japan) where extremely tall and lanky Yasuri Shichika is the seventh head of the Kyotõryuu school of Japanese sword martial arts, even though he physically can't swing a blade. Shichika lives alone on a small island with his older sister Nanami — an island that both siblings and their father were exiled to after their papa (the late 6th head of the Kyotõryuu school) helped defeat a usurper to the Shogunate, and the Shogun didn't know what else to do with the deadly Kyotõryuu master. See, even though nobody in the Kyotõryuu school can handle a sword, they themselves are "living swords," and they can block, slice, and cut as well as any steel blade ever made. And this is precisely why a female "strategian" (her actual self-described title, and not me trying to imitate George W. Bush) who reports directly to the still reigning Shogun — petite, white-haired Togame — pays Shichika's island a visit in order to enlist the head of the Kyotõryuu to help her with her quest: she means to collect 12 cursed swords created by a legendary (and really twisted) swordsmith known as Shikizaki Kiki.

It is said that whoever holds these 12 weapons will be invincible, and Togame wants them for her own reasons. In fact, in the past, she hired the Ninja Tribe of the Maniwa Corps to track down all the blades, but they turned on her and instead started collecting them for themselves. This is when stuff starts to get really.... well, for lack of a clear head and a better term (thank you, NyQuil...), full. It turns out that Togame's father was the man who started the uprising against the Shogun 20 years before, and Shichika's daddy was of course the one who put the smack down on him in a burning castle, right in front of Togame's young eyes. Oh, and the Maniwa Corps' 12 heads are all animal-based ninja (like my favorite, the little Penguin ninja!) — each with a special outfit and ninjutsu trait — and while Togame and Shichika are tooling around Edo Japan looking for the Shikizaki cursed swords, they're also battling these creature-shinobi, and watching their backs as a rising-in-power young princess named Hitei sends her uber-ninja bodyguard out to find out how Togame's sword hunt goes. Ninja, ninja, ninja!!!!

And we really can't forget Shichika's sickly sister, Nanami, the Eleven Retainers of the Yanari Shogunate, and talk of soothsayers, a screwed up timeline, and super strong little girls who like to play in the snow. Every character and every interaction in this series is very important, and very entertaining. Though damn, Katanagatari does get pretty depressing pretty often, so don't expect everything to always turn up cherries and kitten farts for our heroes. Oh, and is it just me, or does the anime director have a giant foot fetish?

Katanagatari is a really super duper, awesomely sweet show, but I will admit that it's not for everyone. Just like Bakemonogatari, there is LOTS of dialogue here. Well, not quite as much as Bakemono, but the characters never shut up. If you're a slow reader you'll miss out on a whole shit ton of absolutely gorgeous backgrounds, character designs, and amazingly choreographed fights while you struggle with the subtitles. You goddamn retard.

Katanagatari's character designs are some of the most interesting (and good) models I've seen in ages, and the series sports a HUGE production budget most of the time. Very fluid fights, and gorgeous sights. It's simply beautiful to look at. This is one show you want to see in hi-def if you can.

What I think I loved most about this show though (beyond the most excellent final episode) is that it's actually pretty deep. It's not blatant about it, but it's all about finding the best way to make it through life with the same materials as everyone else. I really can't get into it more without spoiling some really good character moments, but it's definitely not just an action-only shonen fighting show. Yes, there are some amazingly unique battles featuring some really ingenious ninjutsu and sword techniques in each episode, but this is a samurai drama first and foremost. And although it is fun from the start, it's not until episode 4 that this thing just had me by the balls for the rest of its run.

Episode 4 was one of the biggest trolling eps I've ever seen next to "Who is Cartman's mom! Find out in the next episode!".......... "This week on South Park, Terrence and Phillip in Not Without My Anus!" And yet it is one of the greatest fuck-with-you eps ever. It was applause worthy.

Anyway, like I said before, Katanagatari is kind of like Rurouni Kenshin, but only if Rurouni Kenshin actually moved along at a good pace, and didn't eventually suck, and ended on a fucking brilliant high note instead of that really ghey "Christian Knight" storyline.

So what did I think of Katanagatari? It's probably the best and most fun ninja/samurai anime I've seen since Ninja Scroll. And although it might not be quite as bloody as Scroll, the final episode of Katanagatari was definitely one of the most BRUTAL, yet satisfying endings of anything I've ever seen... All the rules being broken, all the lives shattered, and all the brilliant paybacks... Spectacular! I give it 5 out of 5 Ninja Stars of Destruction. Watch it, pilgrim.

Well, at first I was going to be a bitch and just pour hate upon this anime series like gasoline on a burning sack of puppies, just to cheese off the Rossman... But then I watched it.

I have to tell you all, the levels of depression and dread that this "Sword Story" was able to dish out over the course of its 12 episodes, well, I'm going to have to pull some strings in order to get the writers responsible to come to my domain when they skip their Earthly coil. It's so hard to get decent chaps to write an acceptable scenario for punishment for Hitler, or Chairman Mao, or Mother Theresa (she sold underage whores, trust me) anymore. It's sad really. I mean, budget is no object! Down here they can write whatever they want and I have a crew that can build any set, set up as many explosives as they want, and kill (and rekill) any number of damned souls over and over again... But they just can't think big or dramatic or depressing enough! The fresh blood who came up with the ending to THIS show though, well, they're just what mama ordered!

4 out of 4 Stars of Suicide-inducing Depression from me for Katanagatari. It is indeed most excellent.

Swords. Samurai. Ninjas. Fuck it. Really? Did you think this garbage would be my cup of tea? The only violence and horrors that I like in my life are when shit happens to the Rossman. Like when I removed his shock absorbers just before our boss ordered him to transfer 6 crates of nitroglycerin over to the orphanage, or when I stuck his tongue to that metal pole with super glue (it was summer time, cut me some slack), or when I nailed his feet to the floor and kept shooting him with a Nerf gun... Trust me, that last one will make anybody crazy if it's done to them for over 48 hours straight.

This show just didn't do it for me. Sorry to disappoint you. But you should be used to disappointment by now, if you read this site regularly

I did not like it, Sam I Am. I would not like it on the can. I truly don't like this show of a sham. Blow me.