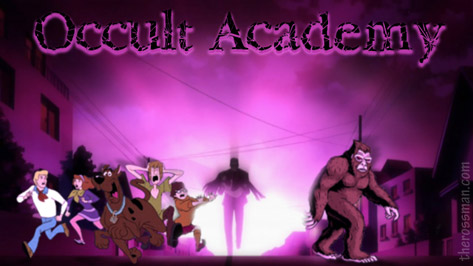 Occult (adjective): beyond the range of ordinary knowledge or understanding; mysterious.
secret; disclosed or communicated only to the initiated.
hidden from view.
in modern language, all supernatural stuff is considered "occult", despite the fact that this is most certainly NOT its real definition; its usage in this way is directly comparable to the intelligence of the population (meaning people are dumb).

Academy (noun): a secondary or high school, esp. a private one.
a school or college for special instruction or training in a subject: a military academy.
a wacky place where Japanese school children learn about the birds and the bees and interact in zany ways that are cause for goofy misadventures on an almost daily basis.

Occult Academy (anime): a goofy, zany, dark, and somewhat foreboding series based in Japan that deals with the paranormal and the avoidance of a prophesied doomsday brought about by something called "The Nostradamus Key".
a fun Japanese anime series that has elements of time travel, aliens, bakemono, spirits, witchcraft, and insane women drivers.

So yeah, all in all I enjoyed the anime known as Seikimatsu Occult Academy. True, the whole of it really wasn't anything new (the characters you've all seen before, the setting [a specialized school that teaches its students lessons beyond the normal, expected curriculum] and the drama are also recycled from shows past), but the final three episodes really took the likeable premise and cast and spun gold out of straw. Not that it was an unenjoyable ride up until the last hour and a half, just that it didn't feel all that inspired until then — though in hindsight, after watching it all, it is apparent that the almost "monster of the week" vibe really did have a purpose, and wasn't as half-assed as it originally appeared. Whatever, I don't know what my point was. I probably didn't even have one.

Let me back up a little and tell you a bit about the story. Occult Academy takes place in the summer of 1999, and is all about the sultry and hot Maya Kumashiro's return to her old town where her eccentric (and uber-rich) father had built the Waldstein Academy in order to teach kids about the occult and its hidden place in the world. See, hot Maya's dad has recently taken a dirt nap and she only came back in order to take over his role as principal and shut the school down. Maya HATES anything related to the supernatural because it reminds her of how her daddy-dearest used to ignore her in his pursuit of knowledge of the dark arts and crazy-ass monsters, and his eventual decision to blow all his time and money into creating the Waldstein school.

Soon though, no-nonsense Maya comes across a naked man who descends from the sky in a beam of light like an angel, and (after a series of unfortunate incidents) realizes that he is indeed a time traveler from the post-apocalyptic year 2012, who is sent back to 1999 in order to stop the prophesied "Nostradamus Key" from calling forth aliens from another dimension on July 21 of that year. All that is known about the alien invasion is the date of their initial attack (that almost destroys all of humanity), and the place where they first appeared: directly above Waldstein Academy. Why they appeared, what the Nostradamus Key actually is, and what role the school plays in these events are all unknowns, but time traveler Fumiaki Uchida still has to do his best to stop this bad shit from happening, or else we're boned as a planet. It doesn't help that the psychic powers he used to wow the world with when he was a kid are all dried up, and that now he's nothing but an incredible coward who deserves the beatings that Maya regularly dishes out — if he fails, the aliens arrive and humanity is all but obliterated.

That's pretty much the basic set up. From there though we meet and befriend a few students, some faculty, and some of the staff at the private school (like the fat, goth, spirit-dowsing guy; the good-hearted and Herculean mechanic; the head-over-heals in-love-with-Fumiaki Vice Principal; Maya's tomboyish childhood friend [who's a student at the school]; the Scooby Doo Velma clone [with her constant catch phrase of "Megane! <My glasses!>.... Megane! <My glasses!> Jinkies! <Jinkies!>"]; and the big-tittied diner owner in town who makes a curry dish just the way the smitten Fumiaki remembers his mother used to). Together, all these characters make for some pretty exciting adventures of the week (actually, most storylines are 2-eps long, so it's really "adventures of the biweek"), and the culmination of all these plotlines in the final 3-part arc made the absolute ending quite epic and smile-inducing... but also kind of bittersweet. I really don't want to ruin anything for you guys, seeing as this show is almost the perfect Halloween series (hey, it's got monsters, ghosts, witches, demons, aliens, time travelers, some good scares, and some blood as well for good measure), and it's the perfect show to watch at this time of year. I want you to give it a chance, and if I spell it all out for you you'll just think you've heard enough and ignore it in order to piss away more time on your faggy Naruto, One Piece, and Bleach episodes instead of trying something new. Oh, and Occult Academy has one of the greatest final battles ever. It's not dragged out, and it's fairly short, but it's the sense of accomplishment and the charge into the brawl that makes it one of the most cheer-worthy things I've seen in ages.

So, what'd I think of Seikimatsu Occult Academy? It had a great opening episode, fantastic character designs, all the supernatural elements one needs for a show with "occult" in the title, and one of the most fulfilling finales I've had the pleasure of watching in quite a long time. I'd say I'd have to give it a "B+" or an "A-". It wasn't perfect, but it was fun as Hell.

BOB FROM THE FUTURE

Yes, I will admit that I was entertained by the premise of this television series, but let me throw in my professional thoughts on the basis of this fictional story's time traveling rules and laws.

At first it appears that the Terminator 1 rule of time travel is the prevailing force in this universe — no matter what the actors try to do, they are stuck in the predestined time stream that was always there, and always going to happen. But then, near the end, we find out that, lo and behold, it's really a Back to the Future-like universe, where one can alter the time stream and become master of his own destiny. Well, to a degree I suppose. Being the master of anything, I mean.

Maybe everything would have worked out for the best if it was a Bill & Ted-styled universe, and that Fumiaki chap said "After this final battle, and after I win, I will travel back in time again and set up this safety line so that it's here now when we go into this last fight!"

I suppose this show wasn't so bad. It did bring the plight of the hapless time warrior to the public's eye, and for that I thank all those involved. I give it 3 out of 4 Time Warrior Salutes of Honour.

Okay, wait... I confused. So was that witch actually like that guy's mother, or his aunt or something? And that other dude, not dead, but then Tokyo, and then the mothmen?! Really, this whole show was like as bad as Back to the Future Part 2. Only with more monsters and some chupacabras. Goddamn chupacabras ate my dog last year! I fuckin' HATES them! Little scaly, assholic demony creatures! I even hunted those bug-eyed bastards down after they made a hammock out of my Mr. Puddle's intestines on my front porch! They had apparently taken refuge in Jimmy Jammer's house, so I had to burn the whole place down. They even imitated Jimmy Jammer's voice fairly well too, holmes! It was crazy, scary close to his actual voice! Yellin' all "Ahhhh! Let me out! Why are you barricading my door from the outside?! I'm burning! Ahhhhhhh! I need to get out!" Little annoying fuckers.

Any TV show with confusin' time travel plots and chupacabras does not get a good grade from me. Thumb dooooooown!