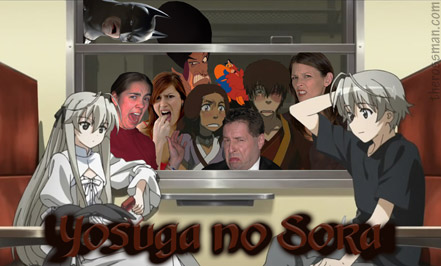 The Kind of Ashamed That
He Watched This ROSSMAN

I watched Yosuga no Sora a while ago and almost didn't write this review, mainly because I didn't ever want to admit that I saw it, but also because I didn't know how I felt about it. This is probably one of the most bipolar opinions I've ever had about a single show on record, and I loved and hated it for pretty much the same reason: it was a sick and twisted and sexy take on the typically bubbly and simultaneously whiny high school harem shows that seem to overpopulate the Japanese airwaves every year.

I also loved it because (like Shuffle! and School Days before it) it didn't just take self-pitying loser girls and make them the only chicks our main protagonist hunts for; it gave us some pretty psychologically messed-up-as-all-Hell damsels in distress, and made their backgrounds all hyperly bizarre and very "Mexican soap operaish" (mixed-up at birth stories, raping young boys tales, and even a forbidden incestuous account that shows just how fucking messed up that kind of inter-familial lusting is) — so this series had that going for it. But on the other hand it was a harem show that featured incest as a main plot point; and just ask any guy out there who actually HAS a sister (or a sister who really has a brother) and they'll tell you that this is one of the sickest things on the face of the planet. Right below the Holocaust, but just above Darfur.

Seriously, all you single children out there, imagine having sex with your grandmother or grandfather. THAT'S just how disturbing real brother and sister incest stories are to the rest of us.

So there I was, sitting in a stupor after watching this thing, and all I could do was turn off my TV, read a book (Neil Gaiman's Smoke and Mirrors, fyi), and try my best to put it all out of my mind. But I just couldn't. For some reason Yosuga no Sora just stayed in my head until now, when I got the chance to actually sit down and get my feelings for it all sorted out. God I hope this works. If this doesn't exorcise my confusion I'm going to have to play the "Hanging Game" again.

Okay, so the whole show is about teenage hunk Haruka Kasugano, and his younger (by minutes) twin sister Sora, moving to their departed grandparents' small mountain town and taking up residence in Meemaw and Peepaw's old abandoned house/doctor's office after their parents died from a car wreck, AIDS, or some kind of venomous spider bite... I don't recall, and it's not important to the plot. Moving on.

As soon as they get to this small town, Haruka begins bumping into cute girl after cute girl that he had either once known, or just had a passing acquaintance with, a few years before when he and his sister spent the summer with their then-alive grandparents. Crushes get reignited, new sexy girlies start falling for him, and soon Haruka finds that he must be the only eligible bachelor in town seeing as he has the attention of every cute shrine priestess, rich girl, maid, swim team girl, and student body babe in the district. Oh, and he's the only thing his sister thinks about while she diddles herself to sleep every night... Calling out his name in ecstasy. Moaning and crying out so that he can hear her in his room next door... Yeah, it goes there. And waaaaaaaaaay beyond.

Okay, so all the chicks love Haruka (who wouldn't!? He's the only fresh-faced boy this podunk town has seen in over a decade, and all these high school girls must be so sick of the same small grab-bag assortment of retarded guys they've known since kindergarten), and he's got to wade through the pool of potential pussy to pick himself only one girl to service with his lil' Haru-chan for the rest of his life... Nah, I'm shitting you — that's my favoritest part of this twisted show: Haruka nails every girl who throws her panties his way. And they show it.

That's always been my biggest pet peeve with most of these shitty harem shows (beyond the small army of annoying, stupid, whiny twats that our hero must choose from): they never show any of the sex that made the original hentai games worth playing in the first place! Nope, none of that self-editing for Yosuga no Sora. They show teenie bopper bodies banging like Ricky Ricardo on the bongos every few episodes! (They're 18! I swear!) Oh, and yeah, this isn't a show with a definitive ending; it's one of those "we'll feed you an ending with each of the girls, and you can pretend that the one you want is the right ending" series. Every handful of eps Haruka figures out the mystery of the main girl involved in that stretch of story, and fucks her (fucks her like a rabid, horny tomcat at a Pretty Kitty Beauty Pageant, raping the grand prize winning Persian after her owner walks away for a minute to rub her trophy in the face of the runner-up). Then we reverse time a little bit and choose another flag in the narrative that would lead to another babe getting reamed. Lather, rinse, repeat. But in a good way... Well, up till the final girl to be conquered.

Yup, this show goes there, and it doesn't apologize for it. The last dame to be dented is of course Sora, Haruka's twin sister. All through the rest of the girls' stories the almost shut-in Sora's been uppity whenever another girl gets too close to her bro, and in the final tale she finally just says "to hell with this! I need me some onii-cawk!" She seduces her sibling, and over the course of several episodes they get it on in bed, in the front hall (with an open door for added kinkiness), and Sora gives her dear bro a sloppy breakfast bj under the kitchen table. It's... It's something.

I (unlike the millions of single-child Japanese men who actually think little sisters are for fornicating with) was — for one of the first times ever — actually disgusted by an anime. La Blue Girl, Urotsukidoji, and even Tenchi GXP never made my stomach turn like this final act in Yosuga no Sora did... But I just couldn't stop watching. It was a perverted trainwreck that actually made me wonder just how the hell this thing could possibly end. All the other girls got good endings with Haruka, but not even the imouto-obsessed Japanese anime industry could give us a happy ending (no pun intended) with Haruka and Sora together... Could they? And that wonderment kept me cold-glued to my TV. They got me. They made me submit. They won.

And yes and no. They do/don't live happily ever after. It's... Well, it's something.

So it's royally fucked up, but it features endings for all the chicks, it's not shy about sex, all the girls are actually cute, and none of them are whiny little cunts who you want to suckerpunch at the first sign of unearned tears in order to give them something to cry about. I don't know if I can really recommend it, so I'll just leave this open to you, my readers. You know if this is up your alley, or if you'd rather clean the bathrooms at the local Taco Bell with your tongue. One thing I can recommend though is the ending theme song used after the mini bonus episodes that follow each of the main episodes (and deal with Haruka working on the rich girl's maid). That is one of the most fun songs (both to listen to, and you can tell they had a great time recording it) I've heard in a long while, and the animation that goes along with it is pretty damn high-larious too. Chappa-chappa.

After sitting through this garbage I couldn't look my brother in the face for a good 3 weeks. It's fucked up. And so are you if you choose to watch that final storyline after being warned like this!

Two middle fingers up. If I had more I'd give them. Seriously, you have so much better stuff to do with your time than watch this filth.

TAMMI WITH AN "i"

Ah seriously don't understand what's got the Rossman's panties in a bunch over this here show. Incest is the best, put your brother to the test, y'all! Or your daddy. Or even Uncle Willy. Or Grandpa Bobby-Joe. Or Aunt Mandy. Or Cousin Jim Bob. Or your daddy. Mmmmmm, your daddy.

Ah liked it. That don't make me dirty or nothin', I mean, it's in the Bible and stuff. Where did all of us humans come from when God only made Adam and Eve, hmmm? Think about it. God gave us the okay, people.