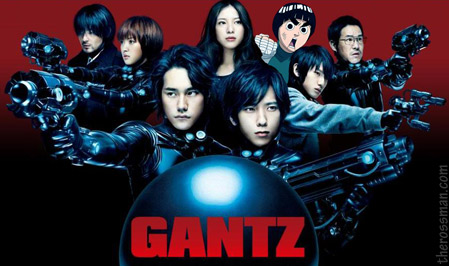 The Suited Up ROSSMAN

The GANTZ manga is one of my many guilty pleasures in this miserable little world. It's one of the most violent, sexy, grotesque, beautiful, brutal, confusing, cheezy, and weird things you've ever seen. If movie ratings were applied to comics it would definitely be Rated X (I always hated the "NC-17" paint job). So then, dear readers, why then is the live action Japanese movie based on this manga essentially PG13? And not even a really hard PG13 at that? Yeah, money, that's usually the answer to everything. The lower the rating, the more people can see it, the more moneys they make... But when you kill the soul and rip out the teeth of a story for the sake of more money, well, people, that's called "selling out".

I really shouldn't be surprised. I 100% should have expected this to happen the moment I heard that somebody was making a live action GANTZ movie (well, two movies, but whatever), but all my mongoloid brain kept thinking was "Oh wow! All that blood and guts and sex and shit will look awesome on the big screen! Gee Whiz! I cannot wait to see it all!" I guess what completely made me stop thinking too much about it was the first image that snuck online of actress Watanabe Natsuna in her $5,000 rubber GANTZ suit.... After seeing that, all else became irrelevant.

Then I waited. I was expecting to have to wait until the movie hit Japanese theaters, then came out on Blu-ray for me to finally see the finished product, but I was pleasantly surprised when I found out that my small American town would be one of the many cities in the country that would host a premiere of the first live action GANTZ movie a week before the official Japanese release date! So I bought a ticket and merrily went to the local multiplex on that cold and snowy January evening (i.e., last Thursday) and got prepared to be blown away!

I wasn't. I wasn't shocked, I wasn't titillated, I wasn't pleased, and in the end I was so disappointed in the whole experience that I didn't even bother to stay for the satellite feed from LA of the interview with the two main stars of the flick that was to immediately follow the premiere.

Perhaps the first sign that this experience wasn't going to impress me was when the movie began and it turned out that we got a crappy English dub of the flick (which was done in the same shitty style as early Godzilla movies, and not along the same lines as our better dubbed anime) instead of the original Japanese with subtitles. All 150 people in the audience with me groaned at the same time, when the first bit of dialogue was spoken. The voice actors and actresses apparently couldn't even agree how to pronounce either the name of the movie (Gans or Gahntz being the two biggest ways, and I swear I heard a Geents once), each other's characters' names, or the word "manga." But that was small potatoes. I could get past a bad dub if the action is top notch and the movie's exciting. If only.

Let me back up a little here. All you newbies who don't know what GANTZ is, here's a crash course. Two stupid motherfuckers (Kei and Masaru) die after saving the life of a drunk hobo who fell into the path of an oncoming subway train (the two stupid fucks get pancaked by the train), and immediately find themselves teleported into a strange and empty apartment (with a nice view of Tokyo Tower from the big living room window). Well, the place is empty except for a few other confused fucks who swear that they've just died too, and a giant black orb. Soon the black orb (referred to as Gantz) tells all the recently dead folk in the room (via misspelled text and low-rez images projected on its shell) that they have to use the futuristic weapons and cyber-suits it is providing them with (that shoot out the sides of the orb in dramatic fashion) to hunt down and kill "aliens" that have appeared on Earth. If each "player" kills enough aliens and scores 100 points he or she can win a prize! Yay! Like resurrecting another player who has already died in Gantz's game, or having Gantz erase their memories and then let them live out the rest of their boring normal lives as if they had never died.

Sounds simple and cool, no? Well, it turns out these aliens that Gantz sic's its dead soldiers on are pretty hard-core and violent sons of bitches. Yeah, they look all goofy and dorky and shit (especially the one who looks like a mechanical Rock Lee before turning into a giant raven-beast... well, it turned into a Tengu-like creature in the manga at least), but they like to fuck up humans who fuck with them but good! Well, once again, at least they do in the manga.

In the movie, the aliens just kill with a bloodless slash here, or a punch there, or a giant foot squashing somebody off screen. This was so fucking lame and pathetically stupid... The MAIN reason anybody'd want to see a live action GANTZ is to see the hyper-violence that it's best known for happen to live actors! I'll be quite honest with you, the manga is basically just an exercise in sex and guro for the perverted masses... But you just can't turn away from it. Even if you have no stomach for gore, you can't wait to see how disgustingly and horribly the next poor asshole dies. Most of the deaths are so unbelievably insane that you wonder just how fucked up a childhood the writer/artist had in order to not only think them up, but also visualize and draw them out in anatomically gory detail.

Okay, so the GANTZ movie is not even a fraction as violent or sex-filled as the manga... "Is that your only problem with it, you big whiner?!" you ask like an obstinate child who thinks he deserves a cookie even after shitting his pants instead of using the potty. No, no it's not my only problem. The entire TONE of the movie is wrong. The all-pervasive feeling behind the manga was a total sense of dread and an almost complete lack of

hope for any kind of salvation for anybody involved. It's so morbid and depressing, yet addictive. You just can't stop reading it because you have no idea what these horrible situations will make the characters do in the future. Some turn all sadistic and evil, some rise up from the ranks to lead their fellow scared souls into victory, some turn on each other, some fall in love, some go bat-shit-insane, and some just give up. The movie is so paint by numbers that it'd make any 3rd rate Hollywood director nod his head in approval (I'm looking at YOU, Uwe Boll). There's no drama to the GANTZ movie, no real feeling of mystery, and NO Lara Croft.

You think I'm shitting you about Lara Croft in the manga, but damn she's there, and she gives the main protagonist, Kei, the best popping of his cherry a high school kid could ever hope for.

Oh, and there's no vulgar charm in the flick that the manga thrived on. I already mentioned the sweaty, sexy Lara Croft public banging in the hallway of the Gantz apartment, but there's also the Gantz ball openly mocking the players (especially in its insistence of only referring to the most booby-licious player as "Tits"), and Kei being such an obvious fucking horn-dog most of the time... You know, like a REAL high school kid. He realizes that every day could easily be his last in this world, and so he just wants to get a taste of some poon tang before he leaves his violent life behind. The movie just has a couple of chaste sideways glances from Kei to Tits, and that's it. Oh, and he's hounded by a dorky artist in his class which never goes anywhere (they're probably leaving that for part 2, but who gives a fuck, and who, after seeing this, will actually want to go back to the theater for part 2 anyway?). And did I mention that the other lead guy, Masaru, has a little brother he's taking care of? No? Well, the movie doesn't really give a shit about it either, so forgive me for not caring worth a crap.

I'm just so goddamn pissed at the missed opportunity here. This could have been something insanely awesome and special, but without the hyper-violence, the sexy uber-sex, and the sense of dread that the manga loved so much, all we're left with here is a low-end movie with a bunch of teenagers running around in rubber outfits shooting guns at CGI creatures... Just like 1/2 of the diarrhea that Hollywood spurts out every summer. Only much more boring and non-fulfilling. Man, I can just imagine what it could have been... And in my mind it is beautiful... And they really got Angelina Jolie to play the Asian Lara Croft, and she banged the SHIT out of Kei in that hallway, right in front of Tits!.......................... I'll be in my bunk.

So, what'd I think of the Live Action GANTZ Movie? A complete waste of $20million. Or was that ¥20million? That second number would make much more sense... Anyway, it was GANTZ In Name Only. It wasn't action packed, it wasn't terribly violent, it wasn't sexy or perverse in the least... It was PG13-GANTZ. It was GANTZ-Lite. It was a walk through a sunny park in Spring instead of a sprint down a dark alley filled with prostitutes, ex-cons, and tentacle demons. There was no reason to make this, and quite honestly I think I'll skip Part 2 when that comes out. I'll just stick with the manga (which isn't pronounced "main-gay," GANTZ Movie). I give it a Disappointed Three Thumbs Down.

How in the holy HELL do you justify this, Japan?! Gantz is the greatest comic book ever made, and you cut its balls off! I worship the shit out of this comic! I even built myself a giant papier-mâché Orb and pretend that it sends me on missions to kill Jimmy Jammer all the time! I've probably reread every volume currently out about 10 times already.... And THIS is how you repay me?! This garbage?

How did you think this was going to go down? Did you think that so-so special effects would make the Gantz-fans of the world forgive you for turning your multi-million dollar flick into a eunuch? When you cut the nards off of Gantz, man, you cut the jabrones off of all of us. Fuck you!

Fuck. This movie was so fucking bad. So pathetically lame. I hate it.

Four Thumbs up will be given to this movie by my robotic appendages. Any movie filled with megatons of hu-man deaths is an excellent way for Robot Pedro to spend an evening!