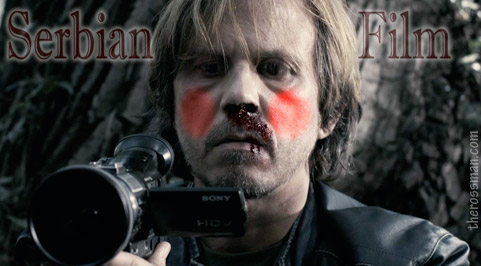 The Let Down ROSSMAN

Never before has the gigantic hype for a film let me down sooooooo completely. I've been told for months that the "disgusting, bloody, tasteless, sick, and perverted" Eastern European drama called A Serbian Film was the most bizarre and vomit-inducing piece of cinema I would ever in my life see. They said it would blow everything else that has ever been filmed out of the sea of bodily fluids that surrounds Hell. Obviously the people who claimed this never saw Meet the Feebles. A Serbian Film didn't even make me twitch in slight discomfort or queasiness.

I guess anime and shit like Suicide Circle has desensitized me. There was nothing new in A Serbian Film at all. There's blood, yes (been there, done that), there's pure gore (ho-hum), there's dead chicks being abused (yawn), there's women being beaten over and over (snore), there's porn, there's sodomy, there's betrayal, there's vengeance... but on top of it being so been-there-done-that, it's so hammy and lame that it's laughable. Let me assure you, it's NOT SUPPOSED TO BE laughable. I swear, it's meant to be over-the-top, yes, but it tries so hard to be serious and to make you think "Oh no! This is terribles! How DARE they put this filth in a movie that people might see!" But it's not terrible. It's just a two-hour pathetic and unintentional joke played on the viewer. It tries its best to SHOCK you, but seriously, as worn out as Howard Stern has become, HE'S still about 5Xs more shocking than anything in this flick. Larry King is about 3Xs as shocking too. A Serbian Film is just a flaccid penis that's pretending to be a raging 13" CAWK OF DOOM. And I pity it.

So what's A Serbian Film about? Really? Do you really care? Oh fuck it, I guess that's why I'm here. I might as well tell you its whole story so that you don't feel the need to waste your time on it too.

A Serbian Film is about an aging, retired porn star named Milos, who's trying to raise a family with his really hot wife. She knows all about his past career though, and every so often she herself pushes her husband back into the fuck industry in order to pay the bills and let them continue to live the middle-class lifestyle she's now used to. Really, neither Milos nor the Mrs. aim that high in this thing — the only women he's ever fucked in his pr0n movies (which they show us at every chance that they can [sans penetration... Please, this is truly only a rated "R" flick!]) are almost all pretty fugly.

Then one day, when money's tight, one of Milos' ex-co-stars (the only hottie he ever fucked for cash, who after he formally retired has been relegated to fucking donkeys... no, that's not a joke... and no, they don't show this, despite the fact that it would have made this thing a LEGEND if they did) comes to him to tell him of some big artsy fartsy rich guy who wants him (and his amazing and famous never-go-down dick) to star in his "artistic masterpiece" for a shit-ton of cash that'll keep him and his fam in Hamburger Helper and Levis jeans for the rest of their lives! Milos thinks this is too good to be true, but his hot (dumb) wife, and his concerned policeman brother tell him to go for it. And so, like the out-of-shape, retarded Mickey Rourke look-alike that he is, he accepts and jumps into the bizarre world of the director's vision.

That vision entails hanging out in orphanages; getting BJs from chicks dressed up as nurses; beating up a chick in front of her young teenage daughter, and afterward having the whore suck his dong; beating up some more women; having some chick's teeth pulled out while in bondage and having some dude mouth-fuck her; drugging up Milos and making him beat, fuck, and decapitate a woman while boning her in a narcotic stupor; watching newborn baby-pr0n (thankfully THIS was off-screen, but heard, and unintentionally HILARIOUS); having Milos get beaten up, drugged some more, sodomized, and then making him rape his wife and 10 year-old son alongside his kinky cop brother; killing the shit out of everybody involved in this orgy scene (by way of guns, knives, head-bashings, heavy objects to the face, and a cock through an eye-socket); and then committing suicide with his wife (by the two of them hugging each other, with their catatonic boy in between them, and Milos shooting a gun through them all); and then having the remaining producer look over their corpses and tell a stunt-man/enforcer to fuck Milos' family's dead bodies for the final shot of the movie within the movie.... End scene.

That's it. That's A Serbian Film. The gore wasn't that excessive, the sex was pretty tame (with no penetration shown for you horny fuckers [who really care about that shit] to get off on, and the illegal stuff was luckily only implied), and the ridiculous factor was cranked up to 11. The characters were all either really, really dumb, or so goofy that I never cared what happened to any of them (good or bad). In the end I wasn't affected one iota by this flick. And I wanted to be. I truly wanted to be disgusted, or at least made to cringe, but no... For all the talk about how tasteless and vulgar it was, I wasn't impressed at all. Yes, it was tasteless, and it tried to be vulgar, but South Park, Ugly Americans, and even Tosh.0 have been much more crass and crude than anything seen in A Serbian Film, and they're all on basic cable. I honestly kept waiting for something big to happen, something I'd never seen before, something so heinously puke-worthy that I would be left in absolute awe to happen in this movie... I was still waiting by the closing credits.

So, what'd I think of A Serbian Film? It tries way too hard to be edgy, distasteful, gruesome, and repulsive, but half the shit that comes animated out of Japan each year already has it beat. If you're looking for something with real SHOCK value, you'd be better off with Meet the Feebles or the glorious Battle Royale. If you're looking for some depraved and debauched porn, hell, just go online and google "Bea Arthur BJ" or "Lemon Party." I give A Serbian Film 0 out of 157.4 Points of Wannabe Perversion. It was just a goofy, poorly written, sad attempt to be an attention whore-like movie. Don't look at it and maybe it'll be ashamed of itself and just slink away.

Oh, and on top of all of this (see above), A Serbian Film IS going to be released in the States... heavily edited. Really, it doesn't even need to be. I've seen worse things on Skinemax at 2 in the morning. Pathetic.

The Kind of Pervy ANGRY AMY

Meh, that was kind of lame really.

What? Did you expect me to get all indignant and shit over this should-have-been-straight-to-cable laughfest? For Christ's sake, the Rossman's made me watch muppets fornicate and slaughter the shit out of each other for years now! This was like a My Little Pony Christmas Special in comparison. And here I thought Eastern Europe was filled with the biggest perverts on the planet... Well, next to Germany. And of course Japan.

A Serbian Film really kind of sucked, and not in any way that could be construed as "good" by the sickos of the world.

Arrrrrrr. I've seen London, and I've seen France, and I've seen many a ladies' underpants, but I've also seen plenty a worse show of depravity in me life than what this tame piece of cinema had to offer. Arrrrrrrr. Really now, have ye ever seen a Taiwanese midget girl bend over backwards and suck an elephant off while wild dogs hump her legs and some fat Japanese men bukkake all over them all, and then commit seppuku? Have ye ever seen a man gut a woman, rape her intestines, and then stuff them back inside her stomach before they both take a bow to the audience while some guy with one bad eye in a doctor's lab coat stitches her back up? Have ye ever seen a cat get fooked by a donkey on a unicycle? Arrrrrrrrrrr.... I have. And what has been seen cannot be UNseen.... Arrrrrrr. This Serbian Movie has nothin' on real world experiences, matey.

What's the word that the kids use nowadays?... Arrrrrrr, this film be "lame-o Spaghetti-Os." Fook it up its pooper.