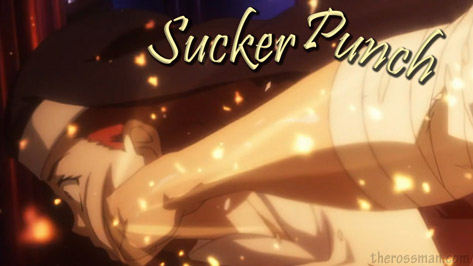 I had been looking forward to Zack Snyder's Sucker Punch for about a year before it came out. I liked or loved all of Snyder's earlier movies (Dawn of the Dead, 300, Watchmen, and hell, even that Guardians of Ga'Hoolio wasn't that bad), and the visuals in the trailers for Sucker Punch blew me away. It was built up to be the most perfect action movie of all time — what with hot chicks in fetish wear, with guns and swords, fighting samurai, zombies, soldiers in the trenches of the Great War, dragons, and robots in beyond over-the-top explosive sequences... And with Snyder's visual flair and ability to tell either convoluted or simple stories with ease, and to blow his audience away with style and substance, I thought Sucker Punch would be a grand fucking slam of awesome sauce. And it almost was.

I'm going to get into some specifics here (both plot and the problem I had with it), so if you're a pussy you might just want to scroll down to my final word right now. Pussy.

WHAT SUCKER PUNCH IS ABOUT

So things start off very Moulin Rouge-like with a stage opening its curtains on the fuckable hottie known only as Baby Doll (the oh so gorgeous Emily Browning) sitting on her bed as she finds out that her mother just died, leaving her and her much younger sister in the care of their fat, ugly, and pedophilic stepfather. Stepdaddy soon becomes enraged when he finds out that his dead wife left her substantial estate to nobody but her two daughters, and in a drunken stupor he first attacks Baby Doll, but when she fights back he locks her in her room and attempts to rape her younger sister. Baby Doll climbs out her 2nd story window on that stormy night, finds a gun, and tries to kill her stepdaddy, but she's apparently a horrible shot and she takes out her beloved sister instead. She then loses her grip on reality, and her stepfather quickly takes her to the local nut house and bribes the head orderly to quickly get her on the list for lobotomies so that she can't tell the cops her side of the story, and so he can then get his wife's mullah.

That all takes place in the film's first 5 minutes in one pretty awesome music video-styled sequence set to The Eurythmics' "Sweet Dreams." The movie then quickly turns into a "prison break" story which is told inside one of Baby Doll's self-retreating delusions which then branches off into more self-retreating delusions as she and her pack of fellow abused inmates (sassy Rocket, her older sister Sweet Pea, hot Asian Amber, and the brunetter Blondie) band together to break out of their moldy stockade where electroshock therapy is usually what's for dinner.

This is where my only real disappointment with Snyder's work comes into play.

MY PROBLEM WITH IT

The first head trip that Baby Doll slips into is when she imagines that the asylum she's in is actually a brothel, and she is forced to dance with her fellow whores in the weekly burlesque shows, and boink some high class clients when ordered. Hey, whatever helps you sleep at night, I say. This brothel is where we follow Baby Doll and her gang of fellow fuck-bunnies for most of the story. Soon though, Baby Doll understands that she needs to unite this ragtag gang of gorgeous girls and gather five items in order to not only to allow them to escape their imprisonment, but most especially keep herself from having some quack knock out a chunk of her grey-matter in five days time. We then find out that BD has the power to entrance anybody who watches her dance in this self-gratifying world, and while they're watching her, all of her friends can steal the individual items that are necessary for their deliverance.

THIS is when things go... well, for lack of a better term, "soft." See, up until this point in the story there were real dangers, real threats, and real, physical pain that Baby Doll and her new friends had to avoid, but as soon as BD starts dancing she escapes into another sub-dream (kinda like Inception's dreams inside of dreams, only 200% cooler) where she and her gal pals fight hordes of the Kaiser's zombie soldiers, futuristic cyborgs, or orcs and fire-spewing dragons... But even though these bloody (and reeeeeeally cool to watch) battles are exciting and interesting, they hold no bearing on the real world at all (at least the first three illusory conflicts that Baby Doll slips into do not). What I mean to say is that what we see in Baby Doll's mind as she dances is just her imagination, it has nothing to do with what she and her friends are up to as her buddies try to steal the items. You don't worry about or care if somebody in BD's dream sequence is going to get cut, shot, or killed because it's not a reflection of what's actually going on in reality (or the first layer of dreaming, which actually IS a reflection of the actual world). There's no drama; it's all just pretty pictures.

Now if Snyder actually had the orc army representing real orderlies or guards in the loony bin, and every time one of them almost captured one of the dames you knew they were truly being threatened and in some kind of danger, then yeah, it would have fixed everything for me. But instead we just watch Baby Doll and her crew fight in steampunk mecha, and slaughter supernatural samurai with no consequences and no fear of any injury or death. No drama there.

This does all change though with the fourth of Baby Doll's battle illusions, and this is what made the first three so regrettable. You see, in the fourth fantasy hallucination, the girls are all together in the same room as BD while she dances for the person she's hypnotizing, and near the end of her delusion, BD can see snippets of the real world, and she knows that something is about to go horribly wrong. Her mind then substitutes the actual scene of bloodshed with the impressions of her fight against some dicky cyborgs and the bomb they're delivering to some future city inside her head, and this fusion of the two worlds proved to be the missing piece for me. I LOVED that sequence, and the following few more scenes, especially when we finally pull back into the insane asylum and see just what of Baby Doll's dreams actually took place and which were based on any kind of reality, and which were completely fabricated. The ending won me over. Unfortunately it also reminded me what I had been missing for the first three quarters of the entire tale. And that made me a bit sad.

Oh, and I really wish I was allowed to see Baby Doll dance just once! She apparently does the sexiest, sluttiest, sultriest boogie anyone's ever seen, but we, the audience, never get to see any of it, we just see her escapism battles that take place. I guess what I can imagine is probably 50,000Xs more hot than anything even a Spearmint Rhino choreographer could come up with though. Maybe it's for the best.

There's not much more to Sucker Punch beyond that. Oh, it was an interesting giant music video, true, but the action shots are very easy to follow and it doesn't lose itself in quick 1/2 second takes that just lead to audience confusion. It's actually a lot like 300 in the sense that the camera pulls back and lets you see every sword swing, every bullet shot, and ever punch that occurs (with some really twisty-bendy angles and camera moves to make you say "My God! It's beautiful!").

The costume designers, visual effects crew, and make-up people better get some kind of award for their work on this thing; it was intoxicating to look at. Yeah, it was a PG-13 flick, but Snyder did a good enough job putting it all together and cutting away from actual people "kill shots" in order to make you forget that it was missing all the gore from all his earlier "R" rated movies. But you at least see all the supernatural and robotic enemies get fucked up something fierce, so don't worry about it not having any real teeth.

So, what'd I think of Sucker Punch? I liked 90% of the whole of it. It had style out its ass, fantastic action sequences, hot chicks in tight leather outfits, and a great sense of fun about it... It just didn't have a sense of urgency or tension until the very end. Not a deal breaker though, ladies, but still, not as great as it could have been. It was almost an action-fetishist's perfect wet dream, but not quite. I do bestow upon it a pretty good rating of a solid "B" though. Go into it not expecting Battle Royale or Die Hard and you'll enjoy the shit out of it. That is all.

And finally, this question: The mystery of whose story it will be, of who draws the curtain, of who sets the stage. Who is it that chooses our steps in the dance, who drives us mad, lashes us with whips and crowns us with victory when we survive the impossible? Who is it that does all these things? It's you... You have all the weapons you need. Now FIGHT!

If you don't stand for something, you'll fall for anything.

Your mind can set you free.

Don't write a check with your mouth you can't cash with your ass.

Yo, bitches! If you don't like Sucker Punch you must be a chick. Like, the only peeps complaining about this movie when it was over in my theater were the noisy twats sitting behind us who kept buggin' their boyfriends the whole time with shit like "Do you think she's hotter than me?" and "Ugh! You think my tits are nicer than hers, right?" Finally I turned around and said, "Yo, you fat water buffalo! First of all, you ugly. You so ugly that when yo mamma takes you to the zoo the monkeys say 'Damn, how'd you get out so fast!' And you fat too! Damn! Yeah, your tits is bigger than those hotties in the movie, but that's only 'cause you're 5'2" and 240lbs!"

They shut up after that, but as they was leavin', they just kept mumbling to their boyfriends shit like "That was so dumb! I hated it! It was stupid! Women really aren't that hot in real life! We're seeing that gay movie with Katherine Heigl next week!" Those poor whipped bastards.

Though I do have one naggin' question, Holmes... Where the fuck did Babby Dolly come up with these fantasies in the first place? Wouldn't a girlie in the 50s mostly think of dollies or Soviet commie bastards or somethin'? Or like unicorns and shit? I mean, really, samurai ghosts and future robots? Weird, G. Weird...