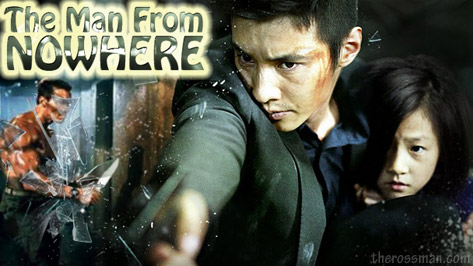 They did it... Those crazy Korean bastards did it. After years of trying (ever since Shiri's debut over a decade ago) they were finally able to replicate a big-budgeted American action movie perfectly. The Man From Nowhere is a consummate clone of your typical stupid, predictable, and giant production-valued American shoot-'em-up. They fucking NAILED it. Way to aim high, South Korea...

No, it wasn't bad or terrible or just plain lousy — it was fun, and I enjoyed watching The Man From Nowhere the whole way through (especially the last half hour, but I'll get to that below). But after seeing pretty much nothing but fantastically original works from the small peninsular nation in the past (Thirst, Old Boy, and The Good, the Bad, the Weird come immediately to mind), it was just such a shock to see this Commando copycat (yes, it's a Korean version of Ah-nold's Commando) after critics praised the shit out of it, and it won pretty much every Asian movie award ever created last year. So yeah, it was predictable and it wasn't anything new, but it was slick, and it was violent as fuck, and that last half hour was pretty damn intense.

Okay, The Man From Nowhere goes a little something like this: There's this Korean mafia group that's trafficking drugs (though never that much... The most we ever see them moving is maybe two sandwich-baggie-sized packages of heroin), but one night, just before a police raid on one of their clubs where a switch-off is being made, a dancer at the place steals the bags, which ends up making the cops look incompetent, and simply leaves the mob PISSED OFF. This druggie dancer then hides the drugs in a camera bag, and puts it up at the crappy pawn shop that her 9 year-old daughter, So-mee, always hangs out in, run by a quiet man, Tae-sik, who looks like he just came in from sleeping in the gutter and urinating himself. You know, the best kind of babysitter. Though to be fair the mother hates that her daughter hangs out with this creepy guy, but since she never pays her own kid any kind of attention, and he never kicks the girl out, at least she's off the streets.

Anyway, the mob (being NOT stupid) figures out what happened to their drugs pretty quickly, and pays a visit to So-mee's mommy. They kidnap the mom and little girl while some enforcers pay a visit to Tae-sik's shop to get the camera bag with their dope in it back. Tae-sik cooperates with the mobsters, well, up to a point. Once he realizes that they don't plan on setting the girl or her mom free he goes all ape shit on them. Well, Navy SEAL ape shit on them. Then the games begin.

Tae-sik loses the kidnapping mobsters on the streets (well, they were in a car and he on foot, but he still gave good chase), but they contact him and tell him that if he ever wants to see So-mee or her mom again (and who wouldn't? The mom's kinda hot and So-mee is the goddamn cutest kid you've ever seen! Seriously, did they genetically create this kid for her ultra-cuteness factor? She puts puppies and kittens playing with baby hamsters to shame!), he'll have to start acting like a courier for them. Once he's been double-crossed in order to get him out of the mafia's way, Tae-sik then goes all full-on Ah-nold/Jet-Li on the world (meaning he kills lots of bad dudes with style and flair), and he does all he can to track down and save his little friend and her mom before their organs can be harvested by the mob (who apparently have a very wide-ranging portfolio of money-making schemes... Which they'd have to if they're only selling two small baggies of heroin at a time).

This movie is so American that it's ridiculous. The way they throw in every action-movie cliche you can think of (quiet man with a shadowy past who just wants to live in peace, dead wife and baby haunting the hero's every waking thought, insane mafioso, goofy cops led by one competent detective, exploding buildings, kids in danger, physics-defying gun battles, lame one liners, never-ending ammo, and good guys getting healed from a gunshot to the kidney simply by having the bullet inexpertly removed), and yet I still cheered Tae-sik along on his journey, and I gasped with every fucked-up bit of hyper-violence perpetrated on good guys and bad guys alike. There's a reason these kinds of flicks make money, people: they're still entertaining when done with love. No, they should not win any awards or any kind of distinction beyond box office profit, but if they are a rollicking roller-coaster ride of rampaging revenge like The Man From Nowhere, well, by all means, let them rock on.

Oh, and one last thought: if you don't like knives or the idea of people getting cut or sliced, you never want to watch this movie. The weapon of choice for one of the mob's assassins is a small curved blade, and he does a very good job of carving up poor fucks the whole movie. And then there's the final 30 minutes... During the very last battle, when Tae-sik just goes fucking nuts on the need-a-beating bad guys, he just lets loose with his own knife and becomes a human Cuisanart of death. People don't get bloodlessly "cut" and fall in acted pain, no sir. They get punctured, and then repeatedly stabbed 5 to 10 more times for maximum damage. You really FEEL the blades and their destruction here. Oh, and the fight between our hero and the blade-wielding mob killer is the most insane knife altercation I have ever seen. Painful.

Okay, one MORE last thought: (And it's kind of a SPOILER, if you're stupid) I truly did like the ending, which was kind of non-American in how Tae-sik was treated after slaughtering several dozen mobsters with extreme prejudice, and blowing up half of the capital city. In most American action movies he'd have the police pat him on the back and maybe get an award for "cleaning up the streets" or something, but here, Tae-sik almost commits suicide after his shit is all done, and still has to go to jail for several dozen MURDERS and millions of dollars worth of property damage... Well, at least until he decides to escape I'm sure.(SPOILERS over)

So, what'd I think of The Man From Nowhere? It's a cookie-cutter, cliche-ridden, South Korean attempt at an American action movie... And it succeeds at being one bad-ass presentation. It's not art (I consider Sympathy for Lady Vengeance to be "art"), but it is quite entertaining. If you like explosions, death, and revenge, you'll probably enjoy the shit out of this thing too. I give it 45.6 out of 51.3 Points of Korean Excellence for its effort. That's not too shabby.

I wonder when the American remake will start filming. Even though this movie was just a retread of over a hundred big Hollywood movies I've seen in the past few decades, you just know that they'll feel the need to remake this muthafucka too.

"Based on the South Korean blockbuster that was based on Commando, Kill Bill, Walking Tall, Rambo 1 and 2 and 3 and 4, Enter the Dragon, and Lone Wolf McQuade!" It'll do gangbusters... Ughhh...

It was alright and all, bitches, but nothing special.

Okay, so is this like a universal truth or rule now? Do all country's action movies need to be predictable and have the same exact plot? I don't watch too many American bloody shooting movies myself, but even I thought this was a remake of something from the USA, and I knew exactly how it would end. And I killed a man before too! (Note from the Rossman: I have NO idea what the hell she's talking about here, why she brought it up, or what to do/say about it... I'm just going to ignore it and hope it's never brought up again.)

I thought there were lots of explosions and things happening, but I found the whole thing boring. I was bored.