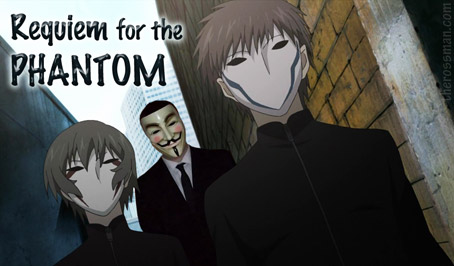 I think it was about 10 years ago that I first saw the anime series known as Noir. It was a slightly above average show that featured a small group of legendary cute babe assassins killing exciting new people with every fresh episode, but what I really loved about it was that there was no unnecessary and retarded humor fucking with the overall dramatic tone of the series (unlike 95% of all anime "dramas" out there). The fact that the two main characters were unrepentant assassins who never grew a conscience about their profession helped my final grade on it too, and I especially appreciated the new locations that made up the varied backdrops of the story (mostly Paris, with side trips to other European locations when the girls were needed to squash somebody's existence a little farther away from home). Then a few years after Noir along came another strong-girls-with-guns in an exotic locale series called Madlax, directed and animated by the same crew. That one quickly became a chore to get through, and the overall story was just retarded. Then after that came El Calzone de la Bruchetta, or whatever the hell it was called — I didn't even bother to watch it; it just sounded and looked so cheezy.

I was pretty burned out on the whole "super secret assassin" thing for a long while, but a few months ago I heard about a new show with the redundant name of Phantom ~Requiem for the Phantom~ by the same people who had given us Noir, Madlax, and that Canole de la Brunchanelly show. I was told that Phantom was based on a "bad ass, totally awesome and really cool" video game, and for some reason I felt that that was enough for me to give the whole sub-genre of unbeatable, professional, sexy assassin women (instead of grizzled old men like Leon or Golgo) another chance. I kept reminding myself of Noir, and kept telling myself that Madlax never happened. Then I gave it a whirl.

What's Phantom ~Requiem for the Phantom~ about, you ask, while touching yourself, trying to get aroused by the thought of sexy, young hit-girls shooting big guns at bad men? Well, it's mainly about a young Japanese teenage boy (Ha! You're now touching yourself while thinking about a young Japanese teenage boy!) who, while touring the States, finds himself in some seedy back alley and accidentally witnesses a mob hit performed by a legendary woman assassin known only as "Phantom" to those who fear her in the underworld. This boy (using his amazing intuitive skills, and some luck) escapes Phantom and manages to stay hidden long enough to impress her handler, a creepy old German guy known as the Scythe Master. And so the Scythe Master convinces his bosses in Inferno (a group of Los Angeles-based underworld up-and-comers who plan to unify the world's mafioso into a kind of criminal UN) to allow him to forge this boy (who is given the codename Zwei) into his next brainwashed killing machine after the success of Phantom, a young Asian woman he had previously mind-raped into being a cold-blooded killer, and whom he named Eine... Because he's super original with codenames along with being uber gruselig.

Yes, Phantom is a young and sexy girl who wears a blank white mask with eye-slits when she's on the job, and she uses all types of guns and knives to mercilessly kill people all the time, so there, you can go back to fondling yourself, you pervert.

Anyway, so the Scythe Master uses some experimental drugs to wipe Zwei's mind so that he can be molded from a clean slate into another America's Top Assassin for Inferno, and he has Phantom/Eine train him in the same way she was trained (with lots of ego and physical bruises to make him learn fast). You already got that. Things go smoothly for everyone involved at first (lots of killing, celebrating, living the criminal dream), but soon power grabs, betrayals, and confusion out the yin-yang occur, twisting up the storyline and fucking up relationships in fantastic ways I never would have prophesied. And then it happens again. And again. That's Phantom's greatest asset: it continuously goes off into uncharted territory that you never expect. Even with me telling you about it you still won't foresee anything that'll happen in this show. Most of the catalysts for these story/character changes happen because of some well crafted plans by some of the intelligent cast of characters (well, intelligent for this show) that go awry, or don't take into account every last possible interference, but one twist in particular takes place because of a quick (and incorrect) jump to conclusions by Zwei, and this later turns out to be a huge mistake that fucks up not only his life, but the life of the most innocent player in this whole mobby ordeal. It was hard to watch that final storyline with the dread of what might happen to any of the people involved, mostly because they all got a really raw deal on this Earth, and none of it seemed fair. Especially with that one character's final wish of a world that could have been, instead of the shit-hand dealt to them because of a hasty and ill-thought-out decision made by another...

Now, I'm not claiming that Requiem for the Phantom is something you've never seen before, as it's not. These characters have all starred in several dozen anime shows in the past (from the quiet, almost emotionless Eine [who really does open up as the series progresses], to the crazy, cowardly, but dangerous mind-fucker Scythe Master [who's always just a mad scientist creep], to the voluptuous, in-it-for-herself Inferno higher up, Claudia [who will get fucked by a stranger in the ass if it means she gets what she wants]), but it's the situations that they get themselves into and out of that made me smile. It's interesting from the very start until the very end. Yes, there were a couple of episodes that, when over, made me think "Whoa, did ANYTHING happen in the last 22 minutes?!", but they're rare, and they don't bore you to death as you watch them (unlike SOME series which are nothing BUT nothing-ever-happens episodes). And those last few chapters... Man, when that one character showed up on the motorcycle like that, I got my hopes up way too high, only to realize the depression that that confrontation would eventually lead to.... Then I was sad. Yes, vague again for a reason, numbnuts.

So in the end, what'd I think of Phantom ~Requiem for the Phantom~? It wasn't bad at all. I was worried that it was going to be another Madlax, but it was a lot more Noir than that. Which is good. It's actually a funky mix of Noir and Gungrave (which I enjoyed as well). I give Phantom a Thumb Up.

I absolutely laugh my fuckin' ass off whenever I see a new movie or TV show about "the mafia" that portrays them all like they're totally suave and sexy mothafuckas that are always two steps ahead of the law. You know what the REAL mafia looks like? They all a bunch of overweight, balding white dudes in track suits who are usually snorting their own supply of snow when they're not peddlin' that shit to school kids. You really think they all hangin' out in mansions and posh high-rises, bitches? You think they all skinny, sexy men and women who when wronged sic a super assassin on they enemies and sit back from a safe distance, never harassed by the po-leece? Yeah, okay, homey, whatever. Keep livin' in yo dream world where all Navy SEALS are indestructible and kind-hearted, all police units are made up of one gruff and one crazy (but lovable) pig, and all one ever needs to become the greatest assassin ever is a nice gun and a montage of somebody beatin' they ass up until they can knife a fucka through Kevlar and between the ribs, or shoot a poor mothafucka from 400 yards away. And I got a bridge in Brooklyn to sell you, G.

No, this Phantom show weren't all that bad or nothin, bitches. And no, I really don't want no "realistic" mob show or nothin'. Shit, man, who wants to see fat Italian men eatin' pizza and snortin' coke for an hour a week. Fuck that shit. Still, this show ain't that bad. Not really. For what it is.

Goddamn piece of shit anti-wop Nips! What the goddamnfuckisthisshit?! They think they'll make a fucking TV show about the Mob in America and they don't have ONE fucking Italian in the whole crowd? What the fucking child-blowin' shit were they thinking? I'll KILL them! I'll KILL them ALL! That's disrespecting, that's what that shit is! You disrespected me, Japan! I don't care if that earthquake and big wave just fucked you up, I'LL come over there and fuck you up more! You don't disrespect the Pesci or the mafia, you fucking ignorant tools! I'll fucking kill you all! Fucking set up one giant car bomb underneath your whole fucking shitty country! Ka-fuckin'-BOOM! You don't disrespect the goddamn Pesci, or he disrespects YOU!